Joan Rivers philosophy of life must have been “create ‘till you die” because that is exactly what she did up to her last breath on Thursday September 4, 2014 of cardiac arrest.  Her untimely death at age 81 made me pause to reflect on the gift of life I still enjoy.  As I began to think about her incredible life, I realized that one tribute would not be enough for the impact of her diverse life; further, any essay I wrote would fit equally well in any one of my three blogs on this site.  So, I decided to write three different essays to celebrate her diverse and fully-lived life that surely put more into the many lives she touched than she took out.  The three essays are posted in my three blogs: “Life, Work and Meaning.”

Laugh ‘till You Die; CREATE ‘till you Die; Inspire ‘til You Die

Joan Rivers said she developed her unique comedic style through trial and error as a child performing for friends, family, and in front of strangers at synagogue events.  She persevered against a storm of fierce criticism that she had absolutely no talent. “And this was from my mother,” she said.  (Rim shot, please.)

Her humor was not about eliciting gentle chuckles; she was hunting the biggest game of all, side-splitting laughter.  The bait for her prey was “uncomfortable truths to expose in public by saying what people were thinking but afraid to say out loud.”  The trick she discovered for getting people to laugh with her was to get them to laugh at her. The first victim of her jokes was always herself.

Joan Rivers was a Successful Entrepreneur and Artist

“What’s funny “i s rooted in misdirection, like Joan Rivers’s joke above; the last person we expect to be unsupportive of our personal desires as child is the mother who gave us life!  Tension is created when familiar ideas that don’t normally belong together (mom and unsupportive) are put together in an unfamiliar context.  This situation triggers our “flight or fight” response to the conflict of holding two opposing pictures in our mind at the same time that were created by the same familiar ideas or objects.

Laughter relieves this tension, dissipating the momentary fear by creating a new sense of awareness.  This is what the art of innovation and creating art feels like.  This is the heart of entrepreneurship:  Creating something wholly original in form and function from things familiar, usually found in plain sight, and developing this art into a sustainable business. This idea is illustrated in my graphic depicting Picasso’s creation of his famous Bull’s Head sculpture from two bicycle parts. 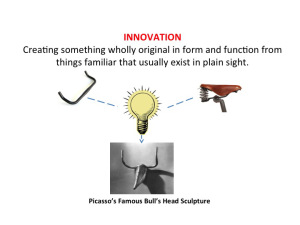 Joan Rivers’s comedic innovations produced lasting comedic art whose function was to induce side-splitting laughter, and whose form was “I will let you laugh at me if you let me laugh at you.”  In the end, the joke is always on us; but revealed truth is a small price to play for all of the shared laughter Joan Rivers gave us.

2 thoughts on “Create ’til You Die: Joan Rivers”