Here is what the world of work* looks like today to Scott Galloway, hot clinical professor of marketing at NYU/Stern as well as hot founder of a hot digital intel firm and a hot $1 billion hedge fund. Our brains have the same functional capacity they had 50,000 years ago when we lived in caves.

WOW!  What happened? How did we get here? What’s next?

Humanity started on a long path living in a cave where we created new models and views of reality–paradigm shifts –in the same organic brains we have today by learning from our survival experiences in nature.

You can demonstrate your paradigm shifting power by focusing on this picture below. Notice how you can shift your perception at will for the picture to appear as either an old

a young woman.  Nobel Prize Laureate Eric Kandel says in Reductionism in Art and Brain Science (2016, pg 30) that “biological findings confirm that visual perception is not a simple window on the world but truly a creation of the brain,” and further that “a child  of 2 or 3 years can distinguish up to thousand different faces.” He describes the complex top down/bottom up  process that takes place in the brain, a familiar problem solving process in many areas of work. 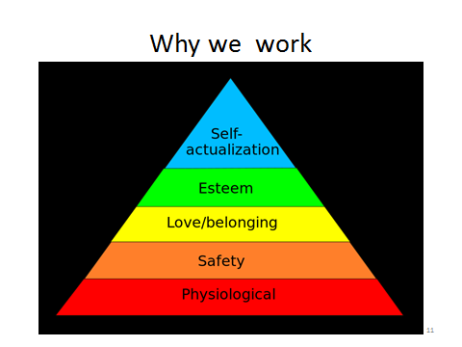 Maslow in the 1950s. Survival taught us that there was some order to be found  in nature, but there was no free lunch at any level; It must have seemed like we were destined to work forever both physically and mentally to satisfy our basic needs.  So life evolved to  revolve around the changing nature of “work” rooted in the generally accepted worldviews that described how work was perceived and expected to be done.  This innovation-driven growth process set in motion a self-propelled push/pull cycle of economic-growth that would alternately consume and replace the productive capacity of each new 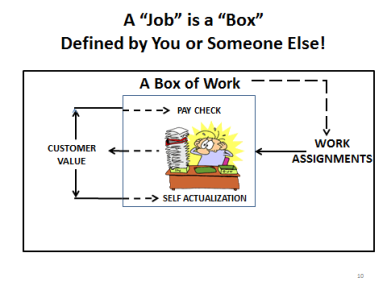 work paradigm as we climbed up the innovation curve to higher and higher economic output per people hour worked; that is until demand for people hours were replaced first by slaves, then by cheap labor of less developed countries, and finally by smart machines invented by educated and smart people replacing  people who used to do that work.  Society’s most recent work paradigm of “work in a box” is being challenged in a fundamentally new way for the first time in history:  There is not enough work for all the people on earth!

The boundaries defining “boxes of work” have gradually melted away as work has become more creative  and based on manipulating and analyzing data and information rather than energy and things.  Many people are learning to work for themselves, which means learning to create their own “box boundaries” to constrain their work energy (the physics definition of  work is the constrained release of energy) to produce something of value.

We are going through a fundamentally new chaotic transition period to the new work environment of a Frictionless society in which information moves at near the speed of light. Society is just beginning to learn how to adapt to this new world (e.g., Scott Galloway).

Here is a chart of how we got to this place through cycles of successive innovation.  Note how innovation is speeding  up paradigm shifts.  Einstein asked how the world would look if he could ride on a wave of light and concluded everything would stand still. We may have to learn to ride on the accelerating wave of paradigm change. Here are my 10 epochs of work paradigms keyed to the primary worker of each epoch:

Our first work box was nature, followed by nation and state boundary boxes, and then abstract  science and technical knowledge boxes, which spawned computing machine boxes of increasing complexity until we are now poised to see if Teleologists can make artificial general intelligence (AGI) machines that are self-aware.  If they can, we may be at the beginning of the next 50,000-year cycle of human evolution to a new series of paradigmatic realities as massless beings that transcend  material forms to travel the galaxy in “skins” of our choice like we get dressed today before we go to work.

* This material was part of a workshop conducted  for  State College Students attending the 2017 Maryland Phi Beta Lambda State Leadership Summit of the Future Business Leaders of America.